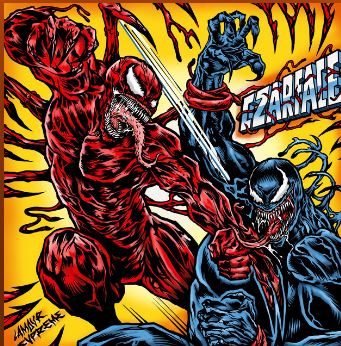 Cruising Carnage: revisiting a short scene from Venom: Let There Be Carnage isn’t our normal fanfare. Normally it’s about discussing the whole film, or about the entire album released in conjunction with a film. This time, there’s just something about this song that enhances this short scene so much. It’s a snapshot of the villain that makes so much sense by the end of the film. The scene just keeps replaying in my head due to this CZARFACE song.

Breaking down a scene due to the music

CZARFACE’s “Good Guys, Bad Guys” epitomizes the scene in which it is used. Cletus Kasady (Woody Harrelson) is revisiting what freedom is after his departure from San Quentin prison, and the devil-may-care attitude he has blasts through the speakers and the opening four lines”

Listen, I done heard a lot of shots fired

I gotta dig a new ditch from bodies stockpiling

I’m back up bigger and better, I can’t stop smiling (CZAR)

The casualness with which the dead are piling up exemplify Cletus’ disregard of human life. What really hits home though is the children’s voices echoing “good guys, bad guys go insane”. That part reminds us of the childhood trauma pumping throughout Kasady more than Carnage does. That newfound invincibility after being shackled. The way in which he feeds his blood lust at the gas station, something he hadn’t done for some time.

There are moments in this sequence that also reflect the disconnect Carnage and Kasady have. The pounding bass line feels like it could be Kasady’s heartbeat now that he’s out. Carnage knows how to use his host in order to get what he wants. It happens they both want similar things, but Carnage has no interest in protecting anyone. That could just amplifying Kasady’s feelings prior to his escape.

“He’s not on drugs, that’s just what I do to your mind… I told you about that pain deep inside of me”

Kasady’s new ride is literally transporting us towards his long lost connection: his extensive separation from his love, Frances Barrison/ Shriek (Naomie Harris). Their childhood connection endures, as the distance between them likely fuels their love for one another. CZARFACE’s chorus of “I told you ’bout that beast deep inside of me” for me aptly defines the symbiotic nature these two have with one another.

It’s wild that a whole two minute scene feels so encapsulated in a song. As the scene actually unfolds, all you really hear are these booming horns throughout before Kasady commits his deed to then find Shriek. At times it’s difficult to hear the lyrics, mainly because of watching the action on screen.

Listening to the full track afterwards enriches that scene so much more. The verses aren’t even alluding to that particular scene. Instead, they match the mood viewers are getting from Kasady in his shiny new toy. This short scene is vital to the rest of the film, but in the moment it doesn’t feel like it. It also might be too much of a “I’m going to tell you what I plan to show you later.” But, it’s a scene that exemplifies who Cletus Kasady is both before and after gaining the symbiote.