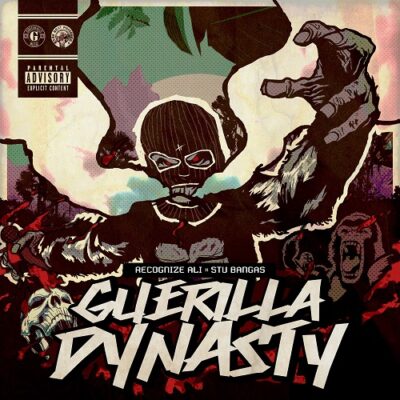 For some reason it seems like last week (July 24th) made it harder to pick a project to take a week’s worth of time to dissect. Sure, there was the Logic album, and a slew of underground work; but comparing that to the previous week, selection was down so I chose a project I came across last week. This Guerilla Dynasty project from Recognize Ali and Stu Bangas suffices for a project you likely have and haven’t heard at the exact same time.

What you’ve heard before

It’s tough to generalize in hip-hop when looking at underground acts, because each project does have its own message and skill set from those involved. Recognize Ali consistently delivers a favorable flow that cuts through what your mainstream artists miss. It’s a mix of 90s era boom bap nostalgia with an underground delivery.

Ali will take on anyone in a cypher before the concert and then deliver stuff that he withheld from said cypher. There’s the sound of hunger that underground emcees exhibit far better than anyone getting consistent radio play and millions of streams. There’s the jazzy instrumentals clashed together with those boom bap drums and loops. Basically, this album is a part of a larger renaissance of boom bap hip-hop.

There’s nothing wrong with said resurgence. It’s nice to see more and more underground artists consistently producing this style of hip-hop. It does make it harder to sift through everything, and the bar is higher due to relentless comparisons to 90s era groups. But, I think that adds to the appeal for fans and artists alike.

If an emcee creates a piece of work that’s comparable to their inspirations, than they’ve reflected said inspiration well. The aura of boom bap radiates well across this project. There is another issue though that reflects poorly on boom bap then and now: the type of braggadocio used.

Sure, hip-hop has largely had boastful lyrics that insults opponents with misogynism and violence. That’s to be expected. It doesn’t mean it should continue to be the norm, though. Times change and if tired tools of the past keep getting used, it’s no wonder boom bap and other reminiscent elements of hip-hop are relegated to the underground. Sprinkled problematic lyrics are still problematic. It’s time to elevate one’s insult game.

While I harp on certain elements of the past that shouldn’t be, let’s highlight the production that works better than the 90s. The beats from Stu Bangas are a dope mix of nostalgia and modern production. Thanks to the advancement of technology, Bangas’ creation of sounds to me comes across as both old school and something brand new.

That could be due to the current popular sound in hip-hop, or it could be that what I’ve heard lately isn’t as quite nostalgic as this project feels. As always, there are positives and negatives to nostalgia, but this project has more pluses than minuses. Another plus for this project are the features.

The delivery and word choice exude that sound you’re hoping for in a boom bap project. It’s tough to differentiate one’s sound in this niche of hip-hop, but these guys are doing just that. What’s a bit tough to take from this project are the length of the songs. Normally one might complain about longer songs and want shorter versions, but this project has a lot of short tracks that would sound and feel fuller if extended.

No doubt it has to do with keeping attention spans due to the current climate, but sometimes breaking with the norm pays further dividends. Due to the length of these tracks, it’s hard to choose favorites. That’s a good and a bad thing; it simultaneously helps the overall project, but also somewhat hinders pushing particular songs, at least for me. In the end, this project has opened up a number of artists for me to check out now. Here’s to expectations that Guerilla Dynasty isn’t the only distinctive project from this group of artists.

One thought on “A Week’s Worth Review: Recognize Ali & Stu Bangas’ “Guerilla Dynasty””