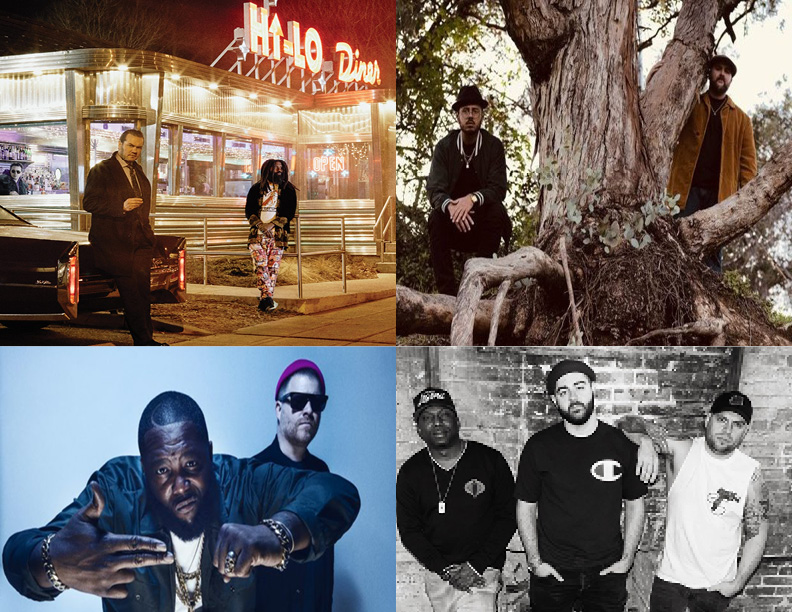 Teaming up in 2020 feels like the official year that the rap duo is back at the forefront of Hip-Hop. It might seem like rap duos (and trios when counting the DJ/producer) haven’t been around for awhile, but don’t be fooled. The 2010s are the first decade I can recall where the rap duo didn’t really surface until the end of the decade.

The 1980s had Eric B. and Rakim, and DJ Jazzy Jeff and The Fresh Prince at the top. The 1990s had every size of group you could think of, though OutKast, Gang Starr and Mobb Deep come to mind first. Enter the new millennium and UGK, The Clipse, Yin Yang Twins and more show just how all over the place duos had gone. Things shift in the 2010s and it’s because the artists either had careers prior to the group, or had one foot out the door for their own solo careers. I bring this up because right about now, it feels like that’s finally ending.

So on my end 2020 meant one thing: Run The Jewels‘ Run The Jewels 4. That’s it. This project was on a countdown ticker for me. However, it soon became evident that several other tapes nabbed my attention. Nearly every group that I’ve been digging into is a veteran group and I think there’s a reason for that.

With the current state of things, emcees with some life experience better conceptualize the world around us. That is not to say newer rappers don’t offer valid snapshots of today. They just don’t have the same referential experience to give listeners deeper context.

For example, Killer Mike and El-P from RTJ are in their 40s; their individual careers span over two decades apiece. That’s a lot of learning, coming up short, and growing. Jamo Gang, Felt, and Blu & Exile all hover at or below this same age range.

This is all of course very subjective. I browsed around looking at charts and streaming numbers; what I’ve found so far is that singles still seem to dictate everything. It makes sense since playlists are the preferred method of music listening today. However, from perusing Hip-Hop sites I do not see a lot of listeners giving those same popular artists attention when it comes to their albums. Albums that have a consistent concept throughout appear to get more attention in the long run.

Perhaps that’s because some Rap fans are obsessed with figuring out the album of the year. Maybe it’s due to ranking their favorites via their overall bodies of work. Either way, I think the defining value as to why Hip-Hop duos are on top is their lyrical content.

I keep bringing this up because it seems like there’s no real way to quantify anymore. Album sales are an outdated method due to streaming services; streaming itself is flawed due to the playlist method of listening today. For me, lyrics are the purest way to judge the skill set of an artist. Of course it makes everything more subjective, but nothing is truly objective anyway. With that being said, let’s look at some lyrics.

Blu & Exile come to mind first because I didn’t anticipate their tape all year. One of my go-to tracks from their 2020 album Miles: From An Interlude Called Life is the track You Ain’t Never Been Blue:

(You ain’t never been blue)

Or when your mama left your papa, you was five, maybe four

You got a dollar but a meal cost five, maybe more

You studied to be a college student until your head sore

You work at a pet store

Breaking down struggle feels as Hip-Hop as you can get. Success comes from getting your reps in and Blu discusses just that. Cramped sleeping arrangements, a job you don’t like; nobody is going to brag about that. “Sell your soul but you can’t get no bread for it” is probably one of the realest lines of the year.

I can understand why some listeners might not like hearing this stuff because music might be an escape for them. But, music, like art, reflects life. To constantly be searching for escapist tunes is obviously your choice, but it seems like delaying the inevitable. Shared experiences from verses like this could instead lead to better decisions, and working through your issues.

Bit of a tangent, but how likely is the average listener bringing up these discussion points listening to what’s atop the Hot 100 Billboard’s top track? Not very likely. Another song that tackles issues is this hit from one of my absolute favorites:

Business time, I’m on mine, I be mindin’ mine (Make money)

Make a dollar, government, they want a dozen dimes (No cap)

The petty kind, might kill ya ’cause they see you shine (Stay strapped)

Am I a hypocrite ’cause I know I did plenty crimes? (Yes, I’m is)

I get broke too many times, I might slang some dimes (Back to trappin’)

You believe corporations runnin’ marijuana? Ooh (How that happen?)

And your country gettin’ ran by a casino owner (Ooh)

Pedophiles sponsor all these fuckin’ racist bastards (They do)

I cannot say enough to show how much I appreciate Killer Mike’s lyrics. A pillar of consistency you’ll be hard-pressed to find elsewhere, Mike dives into how somehow his own hustle is a threat to those in power. This double standard addressed throughout the verse both grabs your attention via its delivery, but also its messaging. These rhymes are consistent throughout the latest RTJ release, too.

What I’m really saying is…

The easiest way to get my point across is to compare two tracks. One is from the artists I’m talking about, the other is the current number one song on Billboard’s Hip-Hop charts. Keep in mind that some use music to escape or as a means of entertainment; meanwhile some are looking for an artist to display their lyrical prowess:

Don’t get me wrong, I actually like both songs posted above. However, I’m not considering the former in any album of the year discussions; the latter is a different story. Two very different duos, but in a strange way both show how 2020 is the year of the rap duo.