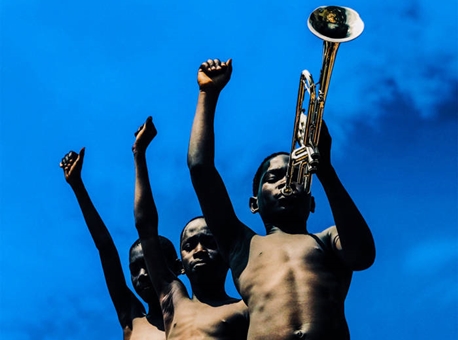 It’s been a difficult decision deciding which album to cover for A Week’s Worth Review this week. Common, Busta Rhymes, and Atmosphere among many others dropped albums in the past week; however Common’s “A Beautiful Revolution (Pt 1)” makes the most sense with the current state of affairs. The album reflects the current US climate right now. It also shows how little, if any progress has been made on the idea of revolution.

A Not So Beautiful Revolution

Common has been one of the most positive, optimistic emcees I can think of for quite awhile. Despite the adversity and difficulties in US society facing underrepresented groups, he urges the oppressed to keep pushing. What’s partially troubling with this is the bar has been lowered over the years. That’s largely because of the growing trend of smaller acts of rebellion being the norm.

To be fair, revolution takes a long time and isn’t accomplished through one or two particular events. Perhaps Common labels this album “A Beautiful Revolution” for that very reason; small acts of revolt can be tangibly achieved today. People are standing up to voice their political opinions. Getting involved is becoming expected if not glowered upon if one attempts to abstain from politics. Perhaps the standard of involvement has lowered because the level of holding each other accountable has also lowered. Common does a succinct job addressing this in the track Fallin’:

The biggest issue being faced is how backwards things have become in the US. This whole notion of wanting segments of Black culture while being disinterested with Black people is peak 2020. Somehow, the fully valid critiques that White people (and other groups) see nothing problematic with coopting what isn’t theirs has led to this forced lower bar of rebellion.

It’s difficult to launch active campaigns of revolution when one’s very existence is put into question. Therefore living comfortably in one’s own skin has become a political act in itself within America as Common references throughout the lines above.

Perhaps part of my malaise with the repeated ideas of self-determination and revolution aren’t due to the themes in this album. Honestly, it might just be foolish to keep expecting US society to accept Black and Brown bodies. By extension, that leads me to keep expecting these messages to not be necessary; unfortunately, this country has done next to nothing to make that happen. One song that reminds listeners of this is the smooth message of power on the PJ-assisted Don’t Forget Who You Are:

The lyrics are of course the focus, but credit is due first to Robert Glasper, Burniss Earl Travis II, and Karriem Riggins for this production. The soundscape enveloping these lyrics is so smooth and so appropriate for the verses Common writes (it reminds me of a J Dilla beat honestly). What’s even more powerful about the lyrics above are not a demand of anything; rather, it’s about recognizing who the proverbial you really is.

The quality and value one has to contributed to their community, family, and self. Your voice is yours, it will sing to you powerfully shows how Black and Brown people find self worth. It’s saddening that this still must be said, but to do so is a continuously revolutionary act.

Perhaps that’s the true beauty in revolution: the acts of self worth and self love. Systemically this nation is not set up to value everyone equally, because that’s how it was planned. There was no goal by the founding fathers to represent everyone when they wrote that document that so many people reference so often. It’s both optimistic and naïve to think otherwise.

Common’s tape yet again shows this simply enough. Often times we hear rebellious music as something overt and pointed, a la Run The Jewels, Sa-Roc, or Rage Against The Machine. Here Common instead takes the subtle approach that hits slightly harder each listen.

One thought on “A Week’s Worth Review: Common’s “A Beautiful Revolution (Pt 1)””