“We put forth this false idea that the world works in a democratic way.” —Boots Riley

Spectacle, power, and freedom were just a few things mentioned by director/musician/artist Boots Riley upon his visit to the University of Colorado at Boulder visit on Wednesday night.

The Sorry To Bother You director focused on how spectacle has been misused by those leaning left on the political spectrum, as well as how power is wielded in the United States.

Riley broke down his points meticulously, and it was an evening full of gems.

Breaking down power and freedom

Historical points connected how different political movements unified people but were then splintered, as Riley shifted his point from spectacle to power and freedom.

“We’re not showing people a path to power; it’d be explaining how we change the system.”

Riley specifically spoke about Occupy Oakland and how many who came out to protest and get involved were doing so for the first time.

The goal of a general strike was explained in a way to these first-timers that felt authentic:

“A lot of people came out because they could see how it would work.” 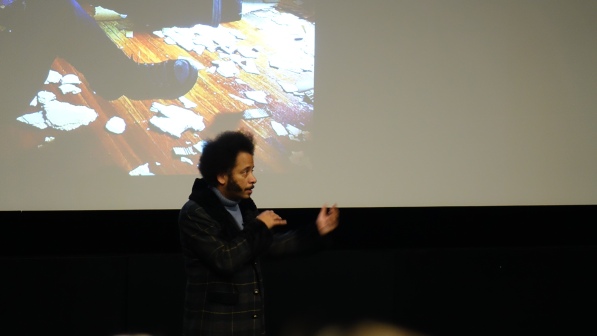 Why the use of power is so important

Rebellion and organizing has been happening for decades via different iterations. Part of why there’s been little success is because capitalism’s weak spot hasn’t been found yet.

“We have not shown people the actual leverage point of power in capitalism.”

Whoever controls power controls freedom, and as Riley mentioned had earlier, there is a struggle between the working class and the ruling class.

Figuring out how to remove the ruling class’ power comes from realizing the importance of labor. Taking charge sounds like, at least from Riley’s perspective, a way to find an actual leverage point.

“The first answer to most of these questions is ‘I don’t know, but…'”

While freedom and power consumed the lion’s share of attention, his 2018 film also was discussed via the perspectives put forth above.

One particular question and answer interaction between an audience member and Riley gave some comic relief to the night:

Audience member: “What is up with the horses?”

Boots Riley: “I didn’t know they’d be there till I got there.” [audience laughs]

Audience member: “Neither did I.” [more audience laughter]

While it was funny discussing the horse-people, there was a deeper meaning to their placement in the movie:

“None of us come out of this unscathed. I needed Cassius to see himself.”

While it was fantastically bizarre to find beasts he wasn’t searching for, it provided a critique not acknowledged enough about the working class:

“I needed him [Cassius] to see something that would shock him to his core. They’re trying to herd us into being these more efficient monsters.”

This scene shows the main character realizing how the ruling class view him and his coworkers at the call center. It is bizarre but that’s what likely helps drive the point home.

From starting to write in 2011 until shooting this film in 2017, a lot of time went into this satirical masterpiece.

Creating an album and touring said album. Rewrite upon rewrite of the original script. Attending the Sundance lab for both writing and directing over the span of two years.

All of those layers definitely added to the final piece of art.

Speaking of art, Riley has a few more things in the works:

It might not be a jump to say that Riley has his hands full. However, the last question of the night brought things full circle to Riley’s focus on power and freedom:

Audience member: “How do you foster resilience in a movement?”

Boots Riley: “It comes with the campaigns you choose. Not every victory is going to be big, there will be little things that help people understand; to get people involved and have them understand how to win.”

Riley reminds us that the little things often makes the biggest differences.