“Pokémon Detective Pikachu” is a delightful departure from all of previous Pokémon movies. Yes, the nostalgia of Pikachu and a bunch of other familiar Pokémon is plastered front and center (and in the background throughout), but the story in Detective Pikachu is a combination of fun and mystery without drawing things out.

If you’re expecting a film to compete with the complexities and drama of “Avengers: Endgame”, then you’re missing the point of this film. This is the best Pokémon film to date that has come out since the first, “Pokémon: The First Movie” did in 1999; it’s also the first live-action crack at this global phenomenon that are these nostalgic creatures. Here’s why you should catch this film.

If you’ve been a fan of Pokémon since the days of playing Pokémon Red/Blue on the Game Boy, then you’ll recognize most of the creatures frolicking about. There are a handful of popular newer gen Pokémon in this film, but largely first generation Pokémon appear. It is nice to have Pikachu talk throughout, as Ryan Reynolds absolutely drives this film.

Reynolds as our favorite yellow mouse has one-liners galore that spark Pikachu’s personality along when it seems his powers aren’t able to (spoilers abound from saying anymore about that). Coupling together Pikachu’s sassiness with Tim Goodman’s (Justice Smith) aloof/anti-socialness from the beginning makes for a natural partnership.

Without giving too much away, Tim’s detective father Harry has gone missing, and his partner Pokémon Pikachu is determined to find out why. There’s more than meets the eye when it comes to what’s happening in Rhyme City, where supposedly Pokémon and people live side by side; this “utopia” of sorts is created and ran by Howard Clifford (Bill Nighy) and his son, Roger (Chris Geere).

Both seem to be interested in bringing humans and Pokémon closer than ever before, thus why Harry Goodman investigates what they’re doing. Harry and Pikachu are injured in a car accident allegedly caused by Mewtwo, which brings us to the aforementioned twist (spoilers again to say anything more here).

Mewtwo, Pikachu, Charizard—all of these creatures play roles we don’t expect. The strongest Pokémon of all, Mewtwo, is a bit of a plot driver. 20 years after its creation, it has a slightly different take on humans than it did back in “Pokémon: The First Movie” (this is a good thing). Howard Clifford realizes just how important Mewtwo is, and what its powers can do for mankind. 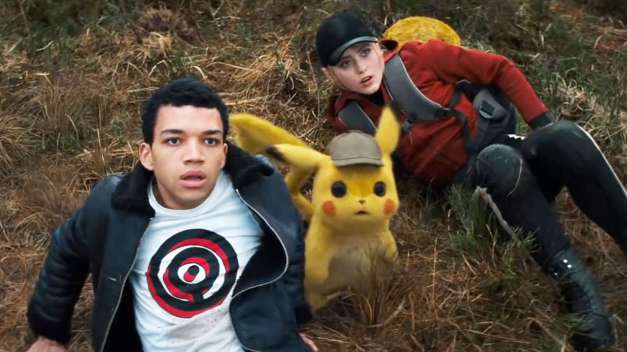 Besides the battle of the father-son duos discussed so far, there is another character that is downplayed a bit: Lucy Stevens (Kathryn Newton). The plucky CMN intern is first to really dig into what Harry Goodman was up to, and realizes the importance of both Pikachu and Tim. While her partner Psyduck continues to cause headaches, her team-up with Tim provides that little something extra that pushes their investigation along. It’s only right she gets the chance she’s been working for at the end (minor spoiler?). Also while he doesn’t play a huge role in the film, Lieutenant Hide Yoshida (Ken Watanabe) also provides another grounded yet underutilized character.

There’s a lot going on story-wise for a Pokémon movie. Another development throughout is how Tim deals with his fractured relationship with his dad, and the resulting growth. Family issues are never easy and this fragmented dynamic provides depth to characters that aren’t developed as much as they could be. Another issue that’s slightly touched on but not enough is how Pokémon are viewed as either partners or tools.

Battles are not the focus of this film, because it both brings up ethical dilemmas and would drag the plot. Fighting creatures like they’re servants makes a lot more sense in a video game, but not so much on film. That could be why Tim’s career choices are outside the realm nostalgic fans expect, but that’s good; challenging nostalgia with new perspectives is one way to keep things fresh.

One last thing I really enjoying seeing that I didn’t expect to hear in this film (spoilers!):

One thought on “Pokémon Detective Pikachu film review: Nostalgia with a twist”