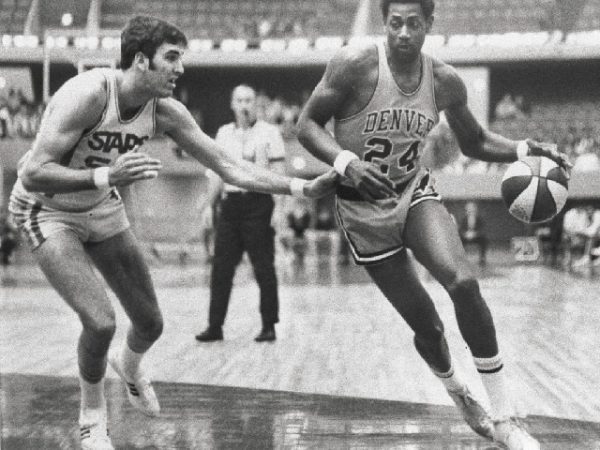 Few Denver basketball fans even know the Rockets existed, or how close Denver came to multiple ABA titles against an all-time Hall of Famer. Even fewer knew who started their pro careers as a Rocket before switching leagues. That’s a bit surprising to this Denver hoops fan. So, let’s revisit where basketball in the mountains came from prior to this current playoff-bound Nuggets iteration.

Launching from the open road

Colorado has had the honor of producing numerous NASA engineers. Unfortunately that isn’t the name inspiration for the Denver Rockets. The name came from space, just a different kind that substitued gas stations for their astral counterparts:

Due to regional neighbor Kansas City’s instability to secure funding, a trucking company is partially responsible for basketball coming to town. Players on the initial 1967-1968 and ’68-’69 rosters showed promise, but kept losing in the playoffs. It wasn’t until the signing of a highly regarded player out of college did the franchise have hope; embodiment of said hope came in the form of Spencer Haywood.

Hope sputters in (then out)

Haywood played in Colorado long before the accolades as a college phenom and future NBA star, Trinidad of all places. As a Junior College player who then transferred to the University of Detroit, Haywood still had some college ball to play, but chose to move onto the pros. At the time the NBA had not allowed players to leave school early, but both the Rockets and Haywood argued financial hardship. It worked.

Haywood scored 30 points a game, grabbed 20 boards a game, and became the ’69-’70 ABA Rookie of the Year and league MVP. The Rockets were first in the standings and earned homecourt advantage, something that had been a barrier in previous seasons. After a tumultuous series against the defending ABA champion Washington Caps (who had been the Oakland Oaks the prior season), the Rockets made it to the second round. Caps star Rick Berry’s instigation in Game 7 would be a sign of things to come in round two.

Craig Raymond didn’t have the same amount of notoriety as Spencer Haywood, but he led the L.A. Stars to a surprising 4-1 series win. Unbeknownst to Denver, it would be the last time Haywood led the club to the postseason. He bolted for the NBA’s Seattle Supersonics after not being paid (“deferred payments” from Denver meant he’d get paid in the unknown future). Haywood would face the same hardship issues with the Sonics from the NBA, before finally getting to play there.

The ’70-’71 season ended in no playoffs. The ’71-’72 and ’72-’73 teams improved, but only to be dismissed by the Indiana Pacers in each postseason. The 1973-1974 season would be the last for the Denver Rockets, as the team lost a one-game playoff to San Diego. Ownership sough to restart the Denver franchise, hiring retired ABA star Larry Brown to coach the newly minted Denver Nuggets basketball club. A new era jumpstarted the franchise into the limelight.

The early 70’s were a mixed bag for the ABA. With stars like Julius Erving and David Thompson lighting up scoreboards, the interest was there. But, the financial side of things always plays a role; teams would form one year and fold the next. Before the inevitable ABA-NBA merger, the Nuggets under head coach Larry Brown and assistant coach Doug Moe transformed. 60 win seasons became the norm.

The Nuggets also defied franchise history. 1976 was a year especially entertaining to watch, as it would be the ABA’s last. The ABA finals were set to take place between Erving and the New York Nets, and Thompson and the Nuggets.

Ironically, the games where Thompson was the leading scorer, the Nuggets lost. Thompson had 42 in game 6 and 32 in game 3, both losses. The biggest blow to Denver’s chances was allowing Erving to average a whopping 37.7 points a game, including a 48 point outburst in game 1. With all five Denver starters averaging double digits, defense would’ve won the Nuggets an ABA championship. It’s the closest to a title Denver has come since.

Thompson, Dan Issel, Bobby Jones, Byron Beck, Ralph Sampson and others had solid careers for the Nuggets in the latter half of ’70s. The 1980s were full of more heartbreak, as Alex English, Lafayette “Fat” Lever, and Kiki Vandeweghe joined Thompson and Issel but couldn’t get out of the playoffs. The Nuggets joined the history books again in scoring the most-ever points in a game; a 186-184 loss to the Detroit Pistons in 1983. A Western Conference finals appearance led by Alex English (25.9 points a game in his Denver career) again showed fans and the league how good this franchise was. The Nuggets just fell short again.

Along with heartbreak in the 1980s, the 1990s also were an up and down decade. A historic victory as an 8-seed defeating the top-seeded Seattle Sonics (poetic justice anyone) was simply amazing in the 1994 season. Dikembe Mutombo provided energy and high hopes for Denver fans, as did newer guys like LaPhonso Ellis, Bryant Stith, Mahmoud Abdul-Rauf and Antonio McDyess. This decade also ended with less than stellar play that led to a high draft pick in the early 2000s for Carmelo Anthony.

I’m largely skimming the 1990s, 2000s, and 2010s because of how much coverage is out there. The 2000s were basically Anthony, Marcus Camby, Kenyon Martin and others coming up short again the Lakers. The 2010s were moving on from Anthony and Allen Iverson until players like Nikola Jokic, Jamal Murray, Gary Harris and others were drafted. Who knows how the 2020s will unfold with Jokic and co., but let’s hope there are further chapters to add to the historic history book that is pro basketball in Denver.

One thought on “Launching Pro Basketball into the Mountains: How the Denver Rockets, Nuggets came to be”