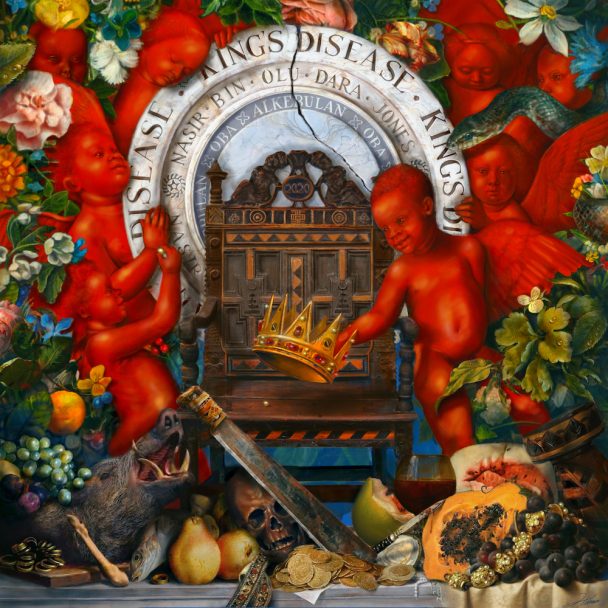 Another week come and gone, another Week’s Worth Review to be had. Time is flying, per usual in 2020; it’s also somehow very slow at the same time. This past week didn’t have a lot to select from, so I went with the obvious choice of a new Nas project, King’s Disease. This album is a correction of sorts, but I’ll get into that later.

One important note for all readers is that this series is a weekly thing. If you haven’t checked it out before, look at the included links above for a starting point. Also, I do my best to try and cover all kinds of stuff. If you don’t like this week’s stuff, wait a week. Just like Colorado’s weather (well, until these recent fires). It’s time to unpack King’s Disease.

Part of the reason that I’m not as enthusiastic about this project is that it doesn’t feel like the focus is in the right place. That’s not to say Nas doesn’t give a solid lyrical performance; he does. It’s also not pointing a finger at Hit-Boy, who did a fantastic job on the beat production. No, it has to do with the album prior to this, and why this one feels iffy in a way.

Kanye West produced Nas’ previous album, entitled Nasir. That album was part of Mr. West’s whirlwind year of production for Nas, Teyana Taylor, his own album, and his collaboration with Kid Cudi. Seven tracks to begin with is a weird number of tracks for an actual album. I can look past that.

This week, however, Nas confirmed what I had thought indirectly: the creation process wasn’t what it should’ve been. Kanye was juggling albums and his schedule really didn’t allow for studio chemistry to truly happen. Nas still delivered solid verses, but it just didn’t feel like a Nas album. It felt like a Kanye presents Nas…which isn’t what was the expected outcome. Fast forward to now, and Hit-Boy has clearly focused on making Nas sound good.

Nostalgia has a place, but not here

This resetting of Nas’ career clock does a good job of doing so. It’s a cohesive project that sounds well planned. However, it still feels like a biography of Nas in the current 2020 climate. There are several tracks that have pointed social commentary that I think are well said. But, there are also other tracks that don’t grab my attention or feel like there’s a bigger point to them. I think I know why.

The concept of King’s Disease, another term for gout which is considered a rich man’s disease, isn’t too appealing. When Nas becomes an elder statesmen of hip-hop, you kind of expect more than general observations. Now granted his hunger will likely never again be anywhere near that of Illmatic or Stillmatic or any of his earlier work. That’s fine.

But to keep giving a pass due to nostalgia seems detrimental to both the fans and Nas himself. Granted it might be bold of me to assume that anything other than an extremely poor public reception to this album will reach Nas. It’s doubtful it will. But I still had to say my piece.

Digging into the tracks themselves

As I mentioned earlier, Hit-Boy clearly ran with the opportunity to produce for Nas. These beats sound fitting for Nas and timely for what’s out right now. I honestly hadn’t listened to much of Hit-Boy’s stuff before, but now I will. The top two tracks for me are Car #85 featuring Charlie Wilson, and likely the biggest track on the album, Ultra Black. The latter is the one that’s getting some chatter.

Black Power and love for Black culture and Black people is all over this track. It’s so timely and timeless at the same time. What’s interesting is how many seem to narrow down on one line, which to be fair is pretty accurate. The cause of the buzz is right here:

The opposite of Doja Cat, Michael Blackson black

Doja Cat has been routinely criticized for chat sites she frequented in the past. Those chat sites allegedly were hangouts for White Supremist/Nationalist individuals, and she allegedly made comments and jokes about not wanting to be Black, or along those lines. It appears her past hasn’t fully derailed her career as of yet, but this won’t help.

Juxtapose within that same line the comparison to comedian Michael Blackson who has a darker skin tone and Nas continues his pro-Black message. The track also refers to Colin Kaerpernick, Billy Dee Williams, and other cities and pop culture references that are pro-Black. This track is solid, and in the long run I hope the above reasons outshine any possible beef with Doja Cat.

Car #85 is a track that I think might get overlooked for the equally impressive Full Circle posse cut or the A$AP Ferg and Fivio Foreign-assisted track Spicy. It shouldn’t. It feels like both throwback Nas and modern day Nas at the same time. I can understand why people are looking for this sound throughout the album; something familiar is kind of needed in the current state of affairs.

In my peripheral view

It has that summertime feel mixed with nostalgia. I know I said we can’t keep giving nostalgia a pass. However, in small doses where the point of the track is nostalgia I’d say it’s totally allowable. Rules are made to be broken, at least in certain cases.

King’s Disease is worth numerous listens because it does grow on you. It’s a fun album that, while at times too nostalgic, gives you what you’re hoping for. Hit-Boy delivers the Nas that listeners were hoping for. It’s a course correction for the Queens emcee, and it makes me curious what’s next.

Not because he has to make something new, but rather what’s left to tackle. It could be another conceptual album or a series of singles packaged together. Either way Nas is at least making music that’s better than most albums out this year. Just not as good as a few other albums that come to mind in 2020.