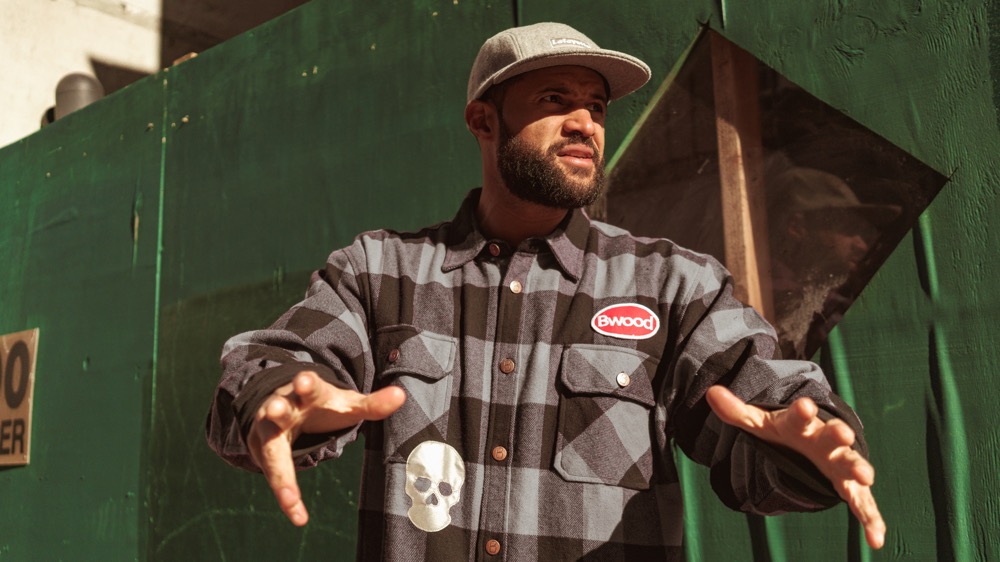 Initially frustrating is not a phrase that comes to mind when writing an interview article, but it’s better than it sounds. When you get into a groove occasionally you become too formulaic. Homeboy Sandman pushed me to realize that very quickly, which I honestly appreciate. The following interview is an excerpt of our conversation about his music and a few other things. Homeboy Sandman is on a mission to learn as much as possible about himself and the world around us.

This Queens emcee has put out a lot of albums, each one capturing a particular timeframe of his life. Growing and learning and reflecting is a life journey. Sometimes, your surroundings might change into a new time period; those that were here are go extinct, while a whole new kind of individual replaces them. That led me to dig into the first new single I heard off of this new album, aptly named Extinction.

Cypher Sessions (CS): So I was listening to your new single [Extinction] that’s out the other day, and I’m curious who the “cool people” are that are going extinct in Extinction?

Homeboy Sandman (HS): Ah word up, okay I can speak a little on that. On the verses of that record I’m talking about a bunch of stuff that I find compellingly bothersome. Like valuing, you know I talk about:

Another part of success today comes in the form of social media. While these sites are everywhere, it doesn’t mean you have to measure your success or talent based on how many followers you might or might not have. Homeboy Sandman recently left social media due to how sometimes the numbers helped, while other times they didn’t. The “corniness” of how social media leads an artist to feast or famine when it comes to opportunity is one too many of us still follow on the daily; this, in part, is what’s leading to the extinction of the “cool people.”

Are there any cool people who want to make authentic art, even if that is not what is what’s rationally the way to become famous?

There are many ways in which we feed ourselves, both in good and bad ways. For Homeboy Sandman, we make that conscious decision on the regular; therefore, we also have to come to terms with doing so and decide if that’s the direction one wants to keep going. This is part of the inspiration of Sandman’s newest album title, Don’t Feed The Monster.

CS: I see your album’s coming out this week (October 16th) called Don’t Feed The Monster, and I’m debating. I wonder which monster we are not supposed to be feeding, because it sounds like it could be a lot of different monsters.

You see the artwork, I have “Don’t Feed The Monster” written across my head, and the monster’s inside my head and I want to starve the monster.

Sandman’s creativity also expands due to the breadth of his subject matter. Never one to shy away from a topic not often discussed by other rappers, this emcee does not allow himself to zero in on one topic and stay there. Growth is not only outside of life on the mic but also when putting in the work on it.

As a person, as a manifestation of God on this planet, I want to learn, I want to grow, I want to seek, I want to experiment. I need novelty, I need adventure, I need the introduction of new stimulus all the time. It’s just integral to my vitality as a person, as an artist.

Evolving oneself beyond accolades

Learning and growing oneself is a lifelong journey. Deciding how to express yourself and use your time and talent in a useful way is your choice. Reflection is clearly a part of growth for Homeboy Sandman, although one particular way of doing so isn’t a part of his plans in the near future.

CS: It sounds like growth and forward motion are the path that you’re on right now, and I would guess that it might include some reflection-

CS: Does that reflection dive into following up on past albums, to make sequels, or…?

CS: It seems like a lot of artists are concerned with legacy, and you aren’t concerned with that at all, which is refreshing, would that be an accurate observation or…?

HS: I admit to you that I have not always talked this way, but where I’m at right now is the temporary things like if somebody thinks I’m cool or not; those are not my focus.

One thought on “Continuous Growth is the goal for Homeboy Sandman”