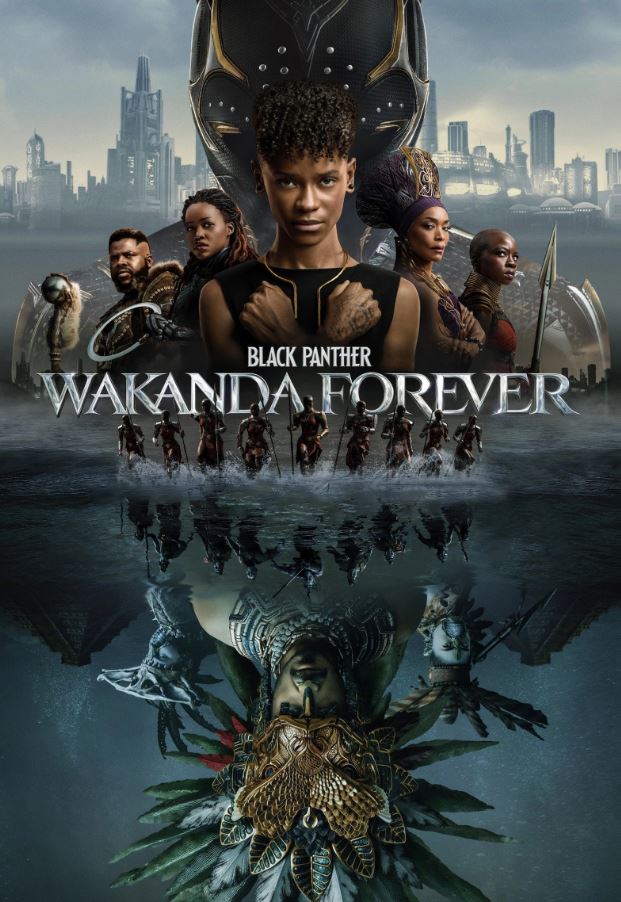 The release of Black Panther Wakanda Forever marks a return to Wakanda and more in our Cypher Flicks film review. The long-awaited sequel to the successful 2018 Black Panther debut brings viewers back to a world weaving through grief, growth, and more. Add in the introduction of Talokan and the mysterious Namor, and you have all kinds of storylines to follow here and into the future of both Marvel films and TV shows.

There are numerous ways to deal with grief. Some decide it’s best to be distracted and rather involved with your work. Others decide to instead be consumed and driven by it. Allowing it to alter who you are seems like not the way to go. [Editor’s Note: if you’ve watched this film, bits and pieces might seem like light spoilers. If you haven’t, these are teases and things to consider after you do watch this film. There’s only one spoiler in here and it’s about setting.]

Only the most broken people can be great leaders.

Grief abounds in this sequel, from opening credit to end credit. What’s so well done by director Ryan Coogler is how he highlights in numerous characters that it’s an ongoing process. There is no real end in sight, but rather further acceptance and realization that one has to learn for themselves how to heal. The interaction that highlights this best is between Namor (Tenoch Huerta) and Shuri (Letitia Wright).

There two, without spoilers, have some things in common. Both are concerned about their people, but even more so about what atrocities have been committed against them. Both characters have family members who have passed away. Each character has moments of clarity where they recognize the grief is driving their decisions and not in a good way.

Namor has allowed what happened to him as a child to drive his decision-making process, being quite rigid about it. He clearly has not accepted what Shuri has when things are all said and done, but that might be due to who surrounds him in Talokan. Namora (Mabel Cadena) and Attuma (Alex Livinalli) are consummate warriors, consumed by their belief in Talokan needing to be defended from the surface. These two might not offer the sagest advice, especially when it comes to solutions that don’t revolve around conflict.

Shuri’s support system consists of Ramonda (Angela Bassett), Okoye (Danai Gurira), Nakia (Lupita Nyong’o), Aneka (Michaela Coel), Ayo (Florence Kasumba), and Mbaku (Winston Duke) amongst others, and all have a sense of reflection being important. T’Challa (Chadwick Boseman, RIP!) was a solid representative of mulling things over, assessing options and moving from there; Ramonda and Mbaku remind Shuri to also do this. Shutting down and ignoring the outside world isn’t something that’s healthy long-term, but it does seem in the short-term to help Shuri. Making moves of aggression like Talokan’s leaders have only yielded short-term solutions, until the final chapter.

It is understandable, even reasonable that as a result of suffering pain, our two rulers wish to transfer that pain elsewhere. Encountering the results of said actions reveals, however, that shifting the pain makes it snowball. Those who keep adding layers to this core end up consumed and flattened by said proverbial snowball.

Grief might be overshadowing something just as important, which is the women in this film carry the story.

The warriors of the Dora Milaje, the Queen Mother Ramonda, the scientific duo of Shuri and Riri Williams (Dominique Thorne), the death of Namor’s mother, and the impact of Director de Fontaine (Julia Louis-Dreyfus) all have parts to play. With the exception of de Fontaine (from what we know), all of the characters mentioned have encountered grief and loss and continue to push forward. The Dora Milaje are honestly one of the best parts of this film for multiple reasons. There are of course the fight scenes. However, the roles they play during the funeral ceremony portion are powerful and quite memorable. Another character who might be the most memorable of this film is the Queen Mother.

Queen Ramonda largely keeps things together in this film, all the while being Wakanda’s leader (Bassett has to win an Oscar for this performance, it is unfathomable if it doesn’t happen). During an interaction with Okoye, however, it is evident that what’s happened still impacts her heavily. That’s important to see and hear. Women routinely have to work through life events and not let it show, lest they be considered “emotional”, “hysterical”, etc. At the same time, they get called names and insulted for being “cold” or standoffish”, so there’s really no “right” answer to the policing of these natural reactions and emotions everyone has.

It’s a double standard that still pervades society today, and these characters show how they battle forward despite working through the impacts of loss and daily life. Men have work to do in dismantling this double standard. One way to perhaps work on this is mimic what Mbaku does in this film: work alongside women and get out of the way.

The musical selections overall felt very subdued. There were certain parts, such as Shuri encountering Talokan, and the montage scenes of Shuri, Riri and others prepping, where the music played a big role. The former, being one of my favorite songs, “Con La Brisa” by Foudeqush and Ludwig Goransson was SO appropriate for Talokan. The latter was a surprise combination of Burna Boy’s “Alone” and Stormzy’s “Interlude”. The effectiveness of these three specific songs was bone-chilling. Another key moment was the car chase scene with Shuri, Okoye, and Riri. This was very reminiscent of the first film, due to hearing “They Want It, But No” from Tobe Nwigme and Fat Nwigme. It felt both like a callback but also a way to get the audience more invested in Riri Williams. This and a grave sequence of events felt like Ironheart needs to be worth it.

The scattering of multiple other tracks over the course of the film was too light. Each song had its place, especially when Fireboy DML’s “Coming Back for You” and Rihanna’s “Lift Me Up” dropped. The music credits listed state the entire album was in the film, which doesn’t seem accurate. There were vocals throughout from Tems, and Rihanna had two different songs drop. A very short moment happened for the Red Hot Chili Peppers with Everett Ross (Martin Freeman), though it did kind of feel overhyped as it happened. The focus of the film was much more about the views and emotions swirling in this film, and the music was more background than in the first one.

Lessons from Wakanda, Talokan, and Beyond

Vibranium exists outside of Wakanda! There’s your one major spoiler, I think you’ll be okay knowing that. This revelation ties into the last entity dealing with grief that’s indirectly mentioned a lot: our home, Earth. The Earth is grieving this constant hunt for resources by those obsessed with money and power, and both nations here know it. Wakanda and Talokan have benefited from this resource and need to protect it. That’s part of the healing process, and why viewers get this ending. Shuri and Namor have grander responsibilities now, and every decision is amplified.

Very intriguing to see the fire red reappearing again and again for Shuri leading up to the throne scene; that subtle detail was some clever foreshadowing by Coogler and company. There were several parts containing very subtle bits of foreshadowing. Threats weren’t empty, certain appearances weren’t random, and things tied together. The only bit that was hidden until a fulfilling reveal was explaining a central question with Nakia. The way it was downplayed throughout was so well written, as it really didn’t seem to matter for the tasks at hand. But it was something that could’ve altered certain actions taken by one of the primary players in this storyline. That would’ve made for a fairly different movie though, which this viewer is thankful it didn’t go that way.

Wakanda Forever is a cathartic experience for everyone from start to finish. It sets up the future of Wakanda and Talokan, and it also gives viewers a brief view into what might be next in Phase 5. The wait was worth it for this layered endeavor, and who knew Trevor Noah was going to get such a bigger role compared to last time? Enjoy this one and sit with the emotions it stirs up.