The best part of Black Panther is when… *silverware drops, everyone glares in this general direction* …is when I give you a review that as far as I can tell, doesn’t spoil anything for those of you who haven’t watched it yet.

Here’s how this will go: it’ll be a question and answer session, where things you might be curious about are addressed in explicit detail (read: facetiously), thus encouraging your theories about Wakanda and it’s multilayered characters. Our creator Daniel Paiz will answer questions, while CS writers ask questions. Here we go. 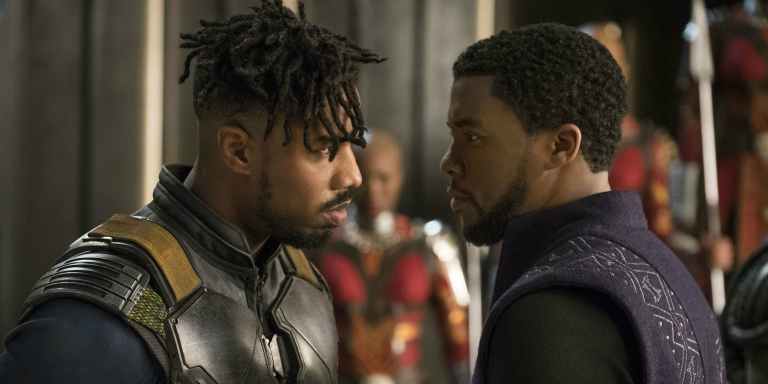 CS: What’s the most impressive thing about Black Panther?

DP: Well, there’s a lot of action, there are some really interesting interactions between numerous core characters, and the film is visually beautiful. The sequencing of events is done so smoothly! Ryan Coogler nails it again as director. HOWEVER, the most impressive aspect of this film is how layered it is.

It is the epitome of, the more you know from the comic books the better it gets (to a point, some liberties are taken here and there), but also if you’ve only watched the MCU movies, you should still enjoy this film. Pseudo-spoiler alert: if you’ve enjoyed Ta-Nehisi Coates’ run of Black Panther, then you should really enjoy what’s presented here.

CS: Who are the characters to watch out for?

DP: I’m not sure I can answer that without spoiling just how incredible those characters are. For me, again it’s the interaction of core characters and how they seemingly can be who you hope for and also who you don’t at the same time. If I were going to have to narrow it down, I’d have to choose…

After you see the film, you’ll understand how rich the film is thanks to these two.

CS: How many villains are there?

DP: All I can say is, that’s an interesting choice of words. We too often tend to think of things as good versus bad, light versus dark, etc. This is where more of that layered storytelling leads you to ask yourself this very question at the end. It’s not as easy as saying “oh, there’s this many bad guys.” Sure, there are some, but you have to look into how you view the characters to answer that.

CS: What can we expect on the music side of things?

DP: Being an audiophile of sorts, this film is very pleasing when it comes to the sonic landscape developed underneath the interactions and dialogue. In fact, one of the action sequences has music that almost made me unable to decide what I was enjoying more, the action in front of my eyes, or the music entering my ears.

Another pseudo-spoiler alert here: there is NO WAY Kendrick Lamar hadn’t already watched this film, more than once. When you listen to the Black Panther album after watching the movie, it feels like Lamar had the film on when building that tape.

CS: What’s the biggest takeaway from this film for you?

DP: There’s been a good deal of discussion about representation when this movie comes up. To me, that’s everything. To see a cast where the leads are fantastically carried by Black men and women, it’s one of those “why did this take so long to happen?” moments.

These characters also present people that have emotions, that have contradictions and shortcomings, while also still working to fulfill roles that not everyone could fill. Imagine being T’Challa knowing what you know at one point in the film about those before you, or being Killmonger growing up with a vendetta that drives your pain and anger?

I think a big reason there’s so much hype for this film are the realistic burdens and societal questions that you and I as viewers deal with and see daily. I really appreciate the sentiment held against the United States. It’s what you think it might be, while also being a bit more nuanced than that.

There really isn’t a generalizing of anyone in this film either, which adds to the layering of characters in the film. Imagine today if in the U.S. was like that? I want to live in the United States presented in this film. It’s a much better place than the one we live in today. That’s enough of my soapbox though!

Last thought by the way: pay attention to how things are done. There is an instance where something happens, and if you’ve read the comics you’re like “Hey! They missed so-and-so!” Technicalities are fun things, because it helps you cope with that instance.

That’s going to do it for the “No Spoilers Please!” version of reviewing the Black Panther movie coming out this Friday. Next week, we’ll do it again, but with spoilers!