“Work is not really work if you’re passionate about it; work is love made visible.”

Chicago emcee and rapper Common (born Lonnie Rashid Lynn, Jr.) delivered one of many gems like this during his lessons-packed speech at Macky Auditorium on the CU-Boulder campus this frigid 20th of February. But first he delivered a freestyle about Colorado, CU-Boulder professor Adam Bradley, and the cold temps outside. He then went to work on dropping knowledge from his own life.

Common started learning lessons young. His first bit of inspiration came at 12-years old when learning about Emmett Till in class; together with words from his teacher Mr. Brown (“You’re greater than that” after being reprimanded for acting out), Common sewn his inspiration as he began to search for his path.

The Grammy-award winner learned from both basketball and writing that there was a path he was meant for. The former taught him the value of consistently working hard, while the latter appeared around April 12th, 1984; Common and his cousin first attempted to write raps, and a path revealed itself.

“The seed has to come from how you feel about that path; your path will be challenged.”

Relationships are tough for everyone, but when you date someone like Erykah Badu, the spotlight burns orders of magnitude brighter. Again a lesson was learned after things ended:

“I was afraid to wear my greatness. You can never dim your light.”

Common learned that after you find whatever your path might be, you have to recognize that path and embrace it. “Dimming your light” for others just because they might be uncomfortable about where you are in life or who you are becoming is not an option.

Common first truly started to belief in himself as he and Kanye West were working on two albums. One went on to be College Dropout, while the other was Be. Both men believed in their work, and as the Grammys approached, five nominations felt like that next step towards reaching where Common was aiming.

“There will be challenges that are meant for you to grow, and to exercise your greatness.”

Not winning a Grammy hurt Common, because he felt that he had made that next move in his rap career. He realized that, while it might not happen now, it would happen eventually.

The higher one climbs towards a goal, the harder it becomes. However, from time to time one need only look around and recognize what they have accomplished and what work has already been done. Recognizing your own efforts helps you to stay on that path you’ve been paving, and to continue on that journey.

Focusing on others in the form of purposeful music and impactful change broadened that path for Mr. Lynn Jr., who founded the Common Ground Foundation; it works to provide opportunities for underserved youth in cities/urban areas. Speaking to people also made Common realize the impact of serving others.

Whether it was visiting the incarcerated in California state penitentiaries and working to change legislation surrounding these issues, or speaking to high school students across the world, serving has become vital to what the veteran emcee does today.

“These are my top five…” 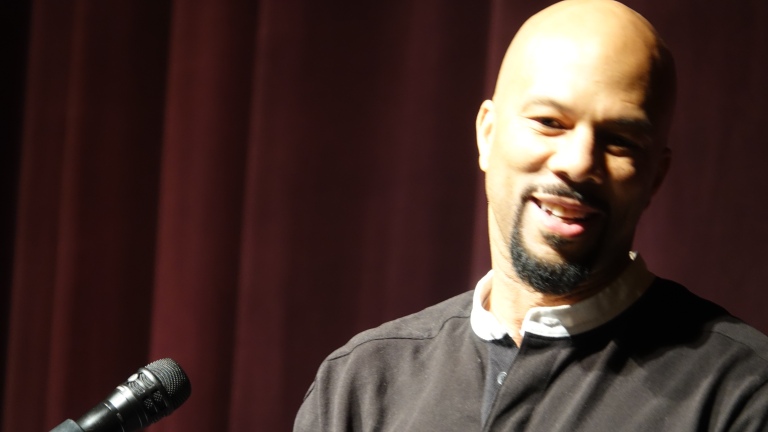 After a speech riddled with tidbits of inspiration and advice ended to a standing ovation, a question and answer session followed with members of the Cultural Events Board.

Topics ranged from what it was like to work with John Legend on the song Glory from the motion picture Selma, to how learning a character as an actor is much harder than writing a song, to appreciating the works of Ta-Nehisi Coates and comparing the current writer of the Black Panther series to James Baldwin.

Then it came to who Common has in his top five rappers.

“Biggie, Nas, Andre 3000, Kendrick Lamar, and myself, Common,” resulted in bursts of applause for each emcee and a bit of lighthearted laughter for Common including himself in his top five.