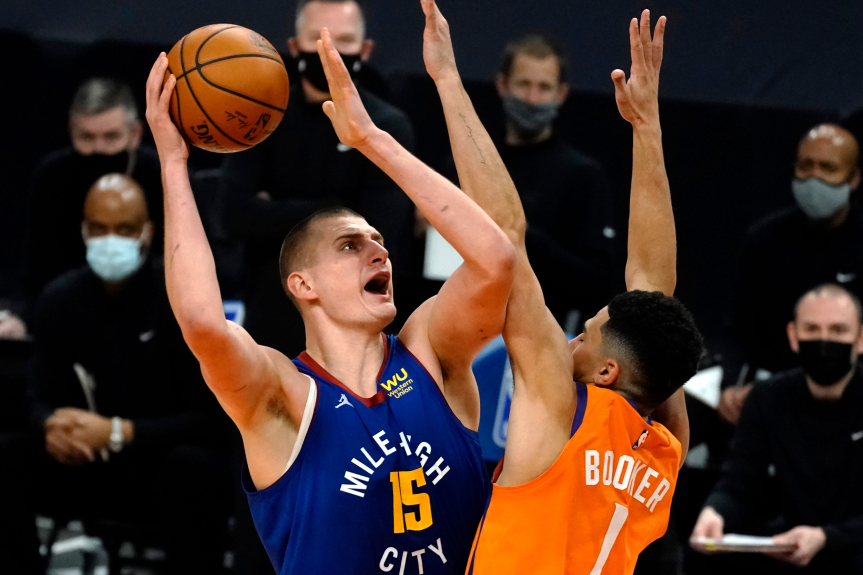 After a thrilling back and forth series, the Denver Nuggets vanquished the Portland Trail Blazers in six games in round one of the Western Conference playoffs. We were reminded why Nikola Jokic is the expectant MVP winner, and how important Michael Porter Jr and the bench is for Denver. The Phoenix Suns are coming off of their own impressive series win against the defending NBA champion Los Angeles Lakers. After several dominating performances by Suns guard Devin Booker, Phoenix is also looking to keep things rolling.

Every NBA playoff series is bound to be exciting and have great matchups; however, let’s get into why this Denver-Phoenix series might be the best one during the NBA’s second round of playoffs.

Breaking down this Nuggets-Suns series

Much like Denver’s first series, there are two names that belong on the playoff marquee: Nikola Jokic and Devin Booker. In the first round Booker (29.7 PTS, 42.9 3P%) had himself a series, including a 47-point outing in the series clincher in Game 6. Joker (33 PTS 10.5 REB, 42.9 3P%) went to work on Portland in his six games, having his way offensively. What’s interesting here is that despite how different these two guys play, their three-point percentages are the same over six games. Just goes to show how much the NBA has evolved when a center is hitting the same percentage as a point guard.

Speaking of point guards, a lot of focus is going to be on Chris Paul (9.2 PTS, 7.7 AST). This isn’t the Paul from his “Lob City” days with the Clippers, but a more dangerous version. Sure, he can hit shots when he needs to; but, it’s the facilitation that makes him an X-factor in this series. His passing and decision-making create opportunities for not just Booker, but a handful of other guys that can make it a tough night for the opponent. This is one area that’ll be interesting to watch how Denver responds. Aaron Gordon (12.5 PTS, 6.5 REB) made things slightly harder for Damian Lillard, so expect something similar from Denver’s defense.

The guy that is starting to fulfill Draft Night expectations is the three-named man: Michael. Porter. Junior. 18.8 PTS, 6.7 REB and 41.5% from downtown is a great start for the guy expected to fill in with Jamal Murray out for the season. There are times when he gets inside his own head too much, but it appears he is working on avoiding those mental pitfalls after solid production over the past six playoff games. Phoenix will have to figure out who to put on MPJ, because who they put on Jokic might also determine how they decide to tackle Porter Jr. defensively.

Both Denver and Phoenix have quite a collection of players to throw at each other after their respective stars. The Nuggets will continue to rely on Gordon, Austin Rivers, Monte Morris, and Facu Campazzo. Campazzo and Morris might get the call to try and disrupt Paul’s floor general capabilities, while Rivers, Gordon, and Shaquille Harrison will try to slow down Booker.

The Suns will most certainly rely on DeAndre Ayton (15.8 PTS, 10.7 REB), Jae Crowder, Mikal Bridges, and Cameron Payne to help Booker and Paul. While the emphasis in the ‘star players’ section was on Phoenix’s guard play, it’s not lost on me that Ayton will be a huge factor for the Suns. What he does on both ends of the court will determine a lot of things in this series. Should he go off offensively, that might open up the 3-point line; should be slow down Jokic, Denver will have to rely on role players to compensate.

Ayton isn’t the only guy getting a bit overlooked in this series. Monte Morris (15.3 PTS, 5.8 AST) could be the key role player for the Nuggets to win this series. His ability to get to the rim, hit threes, and make usually sound decisions with the ball will open things up.

Momentum from the First Round & Head-to-Head season results

Phoenix just knocked out the defending champions from the Orlando Bubble. A solid series win in six games against Los Angeles has the Suns poised for more. Devin Booker is performing at a high level, the chemistry on this team is infectious, and the Suns want to keep things moving.

Denver is coming from a very similar place: a six game series win against a Portland team that was quite possibly expected to pull the series upset. Jokic is doing MVP things, Porter Jr. is stepping up to become the guy draft analysts thought he might be, and role players are stepping up. The Nuggets are seeing how far they can go despite not having a full roster to play. Two waves of momentum are set to crash starting Monday, June 7th.

In the regular season, the Nuggets won two of three games against the Suns. It’s hard to draw from those games, however, because Jamal Murray was still playing. Aaron Gordon was also still in Orlando. Without Murray and with Gordon, Denver has shifted to MPJ taking up scoring duties, and a slew of guards stepping in as well.

The key takeaways from the regular season are how Jokic, Booker, and Ayton performed. Ayton had double-doubles in all three games, Paul was the second leading scorer for Phoenix, and Booker didn’t perform to his potential. The Suns’ lone victory was due to Ayton and Paul; in Denver’s lone loss, Murray was the leading scorer. All of these points might be moot during the series, but they’re things to keep in mind each game.

The Suns seem almost expected to win this series, even more so than the Blazers were against Denver in round one. Phoenix knows better than to overlook Denver, but the Nuggets will still relish the role of underdog due to injuries and Jokic carrying the weight of the franchise. The Nuggets will keep the chemistry from round one going, just slightly more than Phoenix will. While I’m hopeful for another series win in six games, I’m going with Nuggets in seven.

For all of the grumbling by Phoenix players and media about “not getting respect” after a convincing series win over the Los Angeles Lakers, it isn’t going to help your case. Think about it from this perspective: as the number two seed in the Western Conference playoffs, would you want praise and admiration from across the basketball and sports world? As the number two seed, you’re supposed to beat LA. You had the better season and the better record. It is very understandable to want to have that underdog mentality, and sure, some people expect guys like LeBron James to always win. However, the underdog role doesn’t seem to really fly for a team playing this well.

This writer and those players know what matters is how each team performs. It’s a slippery slope expecting to be showered with praise and glowing press. Expectations can lead to disappointment; just ask the basketball club the Suns defeated to make it to the second round.