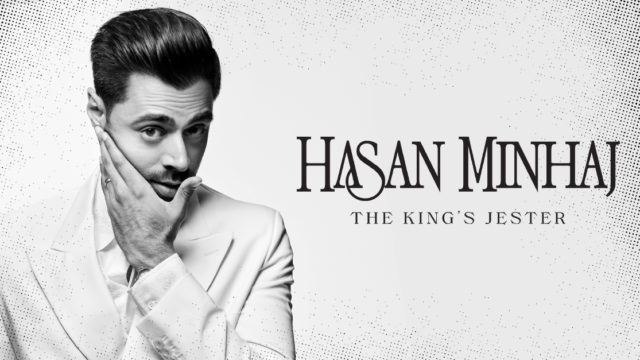 Hasan Minhaj rolled through Denver, Colorado on his “The King’s Jester” tour having to do a bit more than expected. A juggling jester halfway through his set, the Patriot Act showrunner had “one of the weirdest shows of my life”. Before we get to that, it might be prudent to work up to how we got to said weirdness. The night started with a familiar face for some audience members.

Welcome to the stage, from Denver

Everyone in attendance received some extra laughs in the form of Saturday night’s opener, Justine Marino. Originally from Denver, Marino hopped right into a variety of topics, from figuring out if you’re on a date to dating a DJ. This comedian, podcaster, and host of “The Funny Dance Show” brought it, especially when trying to figure out how she was placed on a teen comedy show; relating to Gen Zers might’ve been a bit of a challenge. The set wasn’t very long, but in those 20-30 minutes the crowd was warmed up and ready to experience the headliner.

And now, the moment you’ve all been waiting for

Who knew that infertility and crushed dreams would be great opening topics? Also in 2002, there were a few “brother Erics” going around to mosques across the country, stating they wanted to covert to Islam. In reality, under the Patriot Act these “Erics” were monitoring these communities to see if there was any kind of terrorist activity. That explains why Minhaj named his Netflix show The Patriot Act.

Throw in trending worldwide due to beef with Jared Kushner, Mohammed bin Salman (MSB) and others, and this guy learned how much likes, retweets, and trending fed him. At the same time, it was causing a rift between Hasan and his family. While showing us images of his daughter and his wife, both the love and pain caused by his actions were palpable. The background images really emphasized important story points.

Minhaj’s use of visual aids during his set is a very underrated aspect of his standup. Clearly one lesson learned from his Daily Show and Netflix days is to engage the audience as much as possible, but with a purpose. The images and videos shown in the background emphasize points that hit so well after each initial setup.

It would not be surprising if more comedians focused on further utilizing visual aids and stage space. There are musical artists (like some rappers) who could learn from his stage setups and overall show presence. Speaking of show presence, an incident that unfolded right in the middle of an emotionally tense moment in Hasan’s story shows the way in which to respond to a medical emergency.

While the Daily Show alum told us about opening his mail and shockingly seeing what turned out to not be Anthrax land all over his daughter, several audience members called out for help. Minhaj stopped, asked what was going on, and asked staff to call for medical assistance. An audience member was having a seizure, and the show was stopped to make sure they were being properly attended to. The performer had his staff call paramedics, and the venue’s staff did the same while working to provide access from outside the venue to the viewer.

After paramedics attended to the man, the audience was advised of this update and the show was started back up again. Minhaj masterfully brought us back to laughing, assessing what had just happened. He recounted the story up until the stoppage point at breakneck speed, before continuing on. It had to be a weird challenge to keep going with his routine, but the jokes flowed once again and the set ended like it started.

There are definitely performers across different forms of entertainment that have a blueprint in terms of how this situation was handled. The performer didn’t continue on with his show, or ignore his audience. The staff responded as soon as they could, and the audience also did what was necessary. Granted Bellco Theater is not outside and there are a lot more physical barriers to the entrance and seating areas, but still. Hasan Minhaj did what is supposed to happen, and it’s unlikely this incident will ever trend on Twitter.

Hasan Minhaj likes to be trending, but he learned the hard way what that meant for his family and personal life. The growth this comedian has shown from what I witnessed in 2018 compared to 2021 is subtle. However, it’s equivalent to an NBA player going from a rising star to an NBA All Star. This Sacramento product has taken his storytelling and increased the peaks and valleys between sarcasm and sincerity.

Because the spectrum has widened, the experience has gotten even better. From being sued by Alden Global Capital to meeting with representatives of Saudi Arabia’s Crown Prince Mohammed bin Salman, this guy has faced some giants and came out the other side still in one piece. The King’s Jester continues to make us laugh at the absurdity of the world around us.

Let’s hope he continues to do so now that he’s fully aware of how far he can take these jokes.